Methods of silence – Call for papers Call for Papers for the journal Terrain

What is silencing? This issue of Terrain seeks to interrogate  empirically the diversity of representations and practices of censorship.

Who silences whom, and with what methods? How are practices and techniques of silencing established, critiqued or valued, resisted or taught? These questions can be asked of historical or contemporary forms of state censorship (Darnton 2014), as well as of the broader range of situations which recent works have associated with the notion of censorship (e.g. Muller 2004, Bruyère and Touiller-Feyrabend 2006): from the limits imposed on speech and writing by libel laws, through the preventative mechanisms instituted by private actors (social networks, publishing houses or film studios, university campuses…), and down to the debates one seeks to avoid, the silences and polite omissions imposed by each actor upon him or herself and upon others. Asking about methods of silencing in these contexts requires the identification of concrete relationships and empirical arrangements of actors. It invites an examination of the many ways – fleeting and durable, systematic or unexpected – in which expression is amputated, filtered or remodelled.

This issue also invites an investigation of the political and cultural imaginaries and configurations which coalesce around practices of silencing. What entities do they entail or constitute? Much of the academic literature and public debate around censorship remains anchored in a particular imaginary: censorship is a negative imposition upon the individual speaker, conceived of as in principle free and autonomous. This imaginary, which does indeed inform experiences of censorship in many concrete contexts deserves ethnographic investigation. How, in these contexts, do persons inhabit and find meaning in the positions of censor and of censorable? What visions of the subject, and of its internal multiplicities, are entailed in the notion of ‘self-censorship’[1]?

But this issue also aims to look beyond this more usual political and cultural imaginary of censorship. We also invite contributors to explore forms of silencing at work in societies and ethnographic settings which are not animated by the classic tension between the power of censorship on the one hand and on the other, an individual seeking to express their opinion or construct their identity. Who silences whom, and how, in contexts in which personhood, speech, or public space are conceived otherwise? In this broader comparative frame, silencing might be the effect of a multiplicity of actors and quasi-actors, be they human or non-human: algorithms, illnesses, forests, ancesters or gods. those censored too, might be found beyond the classical liberal figure of the unitary opinionated human subject.

Aside from standard academic articles (8000 words), the issue will also include « portfolios » – short essays built around a collection of images – and « narratives » (4000 words) – descriptive vignettes based on archival or ethnographic material.

If you would like to contribute, please submit a title and 300 word abstract by the 8th of September 2018 to the editors of Terrain: terrain.redaction@cnrs.fr

[1] For instance, Galison (2012) has shown the extent to which the Freudian vision of a divided mind in which some parts censor others was informed by Freud’s own experience of state censorship. But there are many other ways of envisaging internal multiplicities. 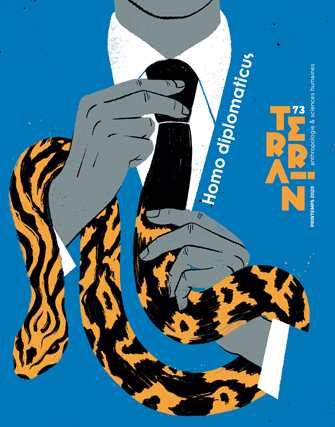